Cocktails at the Atomic Lounge 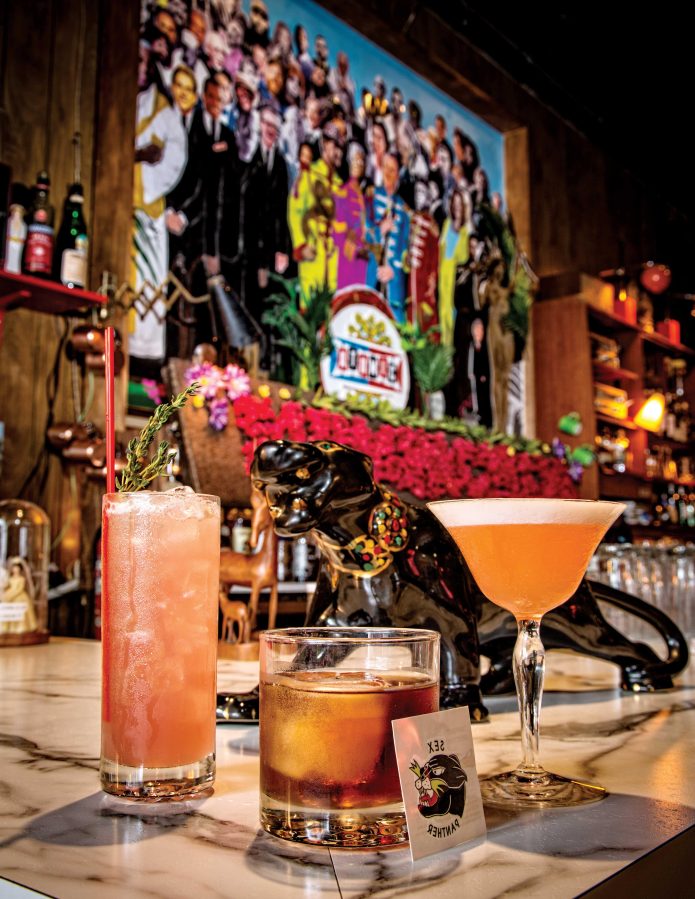 Atomic Lounge and Bar is the most unique bar I have ever pulled a stool to. Atomic is owned by renowned bar master Feizal Valli and his wife, Rachael Roberts.

Above the bar there is an enormous tribute to The Beatles’ 1967 album cover for Sgt. Pepper’s Lonely Hearts Club Band. But this cover has locals as the band and club members, with Frank Stitt center stage. I also see B-Metro magazine’s publisher, Joe O’Donnell among the “lonely.” And the fun does not stop there. There are cubby holes overstuffed with costumes that you can dress up in should the mood strike you—after a drink or two—to become a hotdog, Super Man, Elvis, a monkey or another animal.

The entire ambience is a whimsical blast from the past. No big screen televisions here. Plastic portable televisions, with antennas, dot the main space. Here patrons’ trophies, brought from their attics, adorn the top of the fireplace mantle. Behind the fireplace is a space with photographs of locals. Among the booths is a bubble booth, where the bartender can release bubbles into the air above should the happy urge strike. Beyond it is the hall space, which has wallpaper reminiscent of The Beverly Hills Hotel’s Martinique wallpaper that is used in its Fountain Coffee Room. But unique to this room is the sound of thunder and rain. And the back room is the party room with life-size cocktail umbrellas above.

The specialty cocktails are named for characters—local characters, who frequent the bar or whom owner Valli has poured for in the past. The Chase Lewis is named for one of Valli’s early regulars from “back in the day,” and is described as “tart, healthy, and unpredictable.” It may be named for a man, but I find it suits this female famously. It is peach in color and served in a highball on the rocks with a rosemary garnish. It is a mix of Redmont Gin, pomegranate liqueur, lime, ginger, honey, and thyme. It is silky, smooth, and thirst quenching.

The Legendary Sex Panther is named for a cologne from the movie Anchorman: Legend of Ron Burgundy, in which it was made by Odeon, illegal in nine countries, along with bits of real panther and used by Brian Fantana to seduce Veronica Conrningstone. Seduce it does as it is “built on bones.” This slow sipper is served in its own special lowball glass with ice sphere, to melt the ice slowly. This sensuous blend of bourbon, Blackstrap Rum, Cynar, Demerara, bitters, and flame has its own (temporary) panther tattoo. Yes, this drink has its own tattoo! And no, you do not have to wear one to drink it.

And the Brad Green is named for a local attorney, whom Valli remembers from the bar during his Hot and Hot Fish Club days. Served and shaken martini style, this orange cocktail has a painted egg white top. Made of honeysuckle lemon, peche de vigne, pomegranate  juice, peach bitters, and egg white, bartender Dustin Battle shakes it dry and then wet. It is foamy, frothy, and fabulous. •

These are hands down the best fish tacos I have ever eaten I hope you enjoy!
What’s Fresh: Blackened Mahi Mahi Fish Tacos with Kohlrabi Slaw
%d bloggers like this: