Steak with Roasted Tomatillo Salsa and Vegetables and Prickly Pear 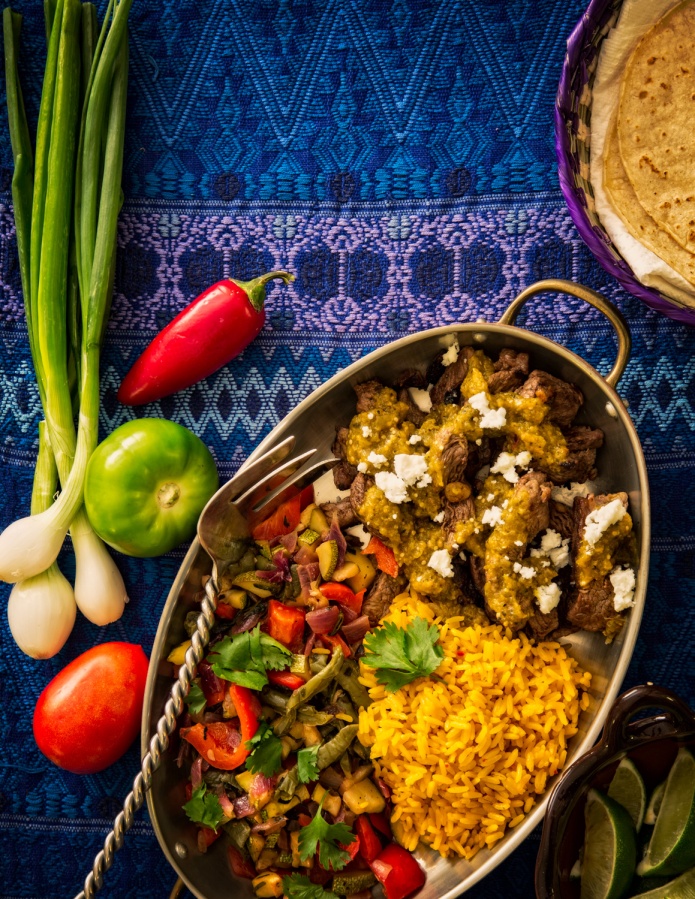 salt and pepper to taste

Tomatillo Sauce: This can be made in advance. Roast four tomatillos, three roma tomatoes, and a poblano pepper till charred, then drop in ice bath to remove skins. Remove seeds from the poblano pepper. Put poblano pepper, tomatillo, three romas, half a red onion, three cloves of garlic, one-fourth cup of cut cilantro, half a teaspoon of dried oregano, and the juice of one lime in a blender. Then cook down the mixture in a small sauce pan until thick and not runny. Let sit overnight in the fridge and reheat to serve (or serve hot.)

Fajita meat: With a little olive oil, cook two cloves of garlic till aromatic; then add the meat, the juice of one lime, and a pinch of salt and cook until meat is brown.

Vegetables: With a little olive oil, cook two cloves of garlic and onions for a couple of minutes; then add the zucchini, three romas, red pepper, half a teaspoon of dried oregano, prickly pear, one-fourth a cup of cilantro, a little salt and pepper, and the juice of one lime. Cook until the vegetables are soft.

To serve, add the tomatillo sauce to the meat, plate the vegetables, the rice, and some cilantro and con queso to garnish. Serve with corn tortillas and a little squeeze of lime.

These are hands down the best fish tacos I have ever eaten I hope you enjoy!
What’s Fresh: Blackened Mahi Mahi Fish Tacos with Kohlrabi Slaw
Loading Comments...
%d bloggers like this: