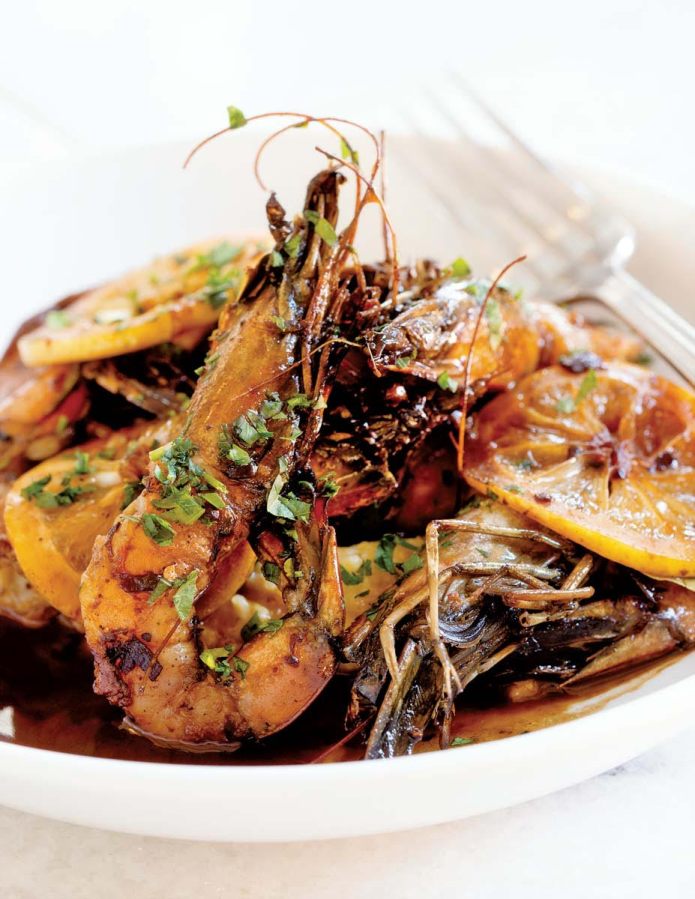 Roots and Revelry is located on 2nd Avenue North, on the second floor of the Thomas Jefferson Tower. The restaurant is open for lunch Tuesday through Friday, dinner nightly, and brunch on Saturday and Sunday.

The 19-story Thomas Jefferson Hotel opened its 350 rooms in 1929 at 1623 2nd Avenue North. It later became Cabana Hotel (where Paul “Bear” Bryant regularly reserved the entire 17th floor when the Tide played at Legion Field), and afterwards, Leer Tower. Since 1983, it has sat vacant. But today new life is being breathed into this beauty of a building thanks to Brian Beshara of Beshara Investment Group, which bought the building in 2013. Roots and Revelry operates while the final stages of a $30 million redevelopment—which will include 96 apartments, retail suites and private event space—are still underway (at press time). The restaurant opened in early 2017 just after the building’s first residents moved into the apartments above in December 2016.

Entering the unfinished remodel of the lobby we head up the original staircase to the restaurant. The doors enter midway of the long space, with bar area to the right and main dining area to the left. The rectangular dining room is painted white with gold accents and awash in natural light. One wall is lined with French doors, each with its own terrace view. Mirrors flank the back wall, reflecting the same. A long banquette in the middle of the dining space is dotted with café tables topped with the former hotel’s Alabama White marble. Another banquette lines the back wall below a colorful mural painted by local artist Claire Godbee. And at the opposite end is the bar with bar top tables. 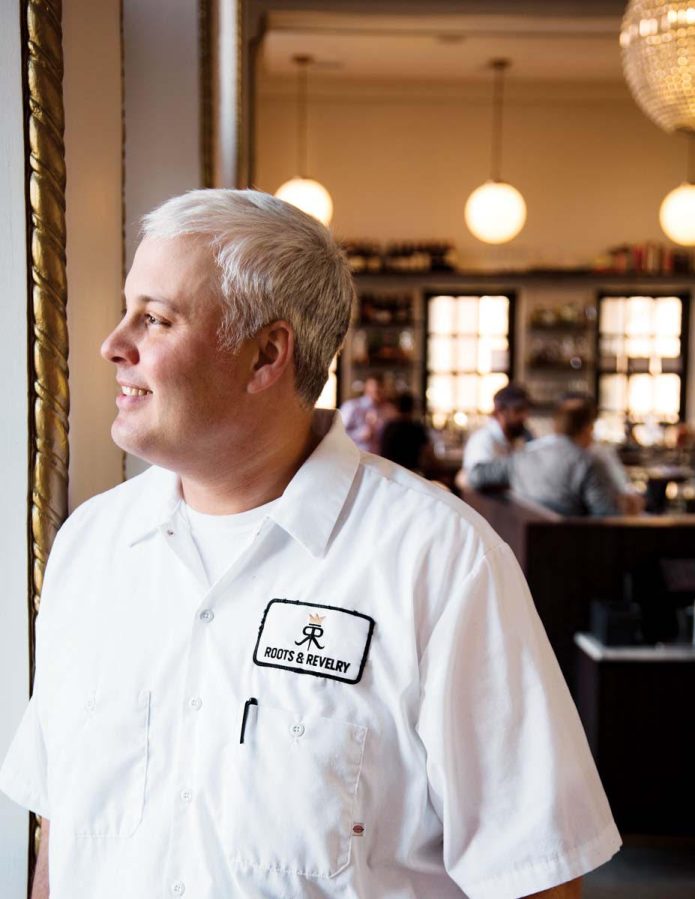 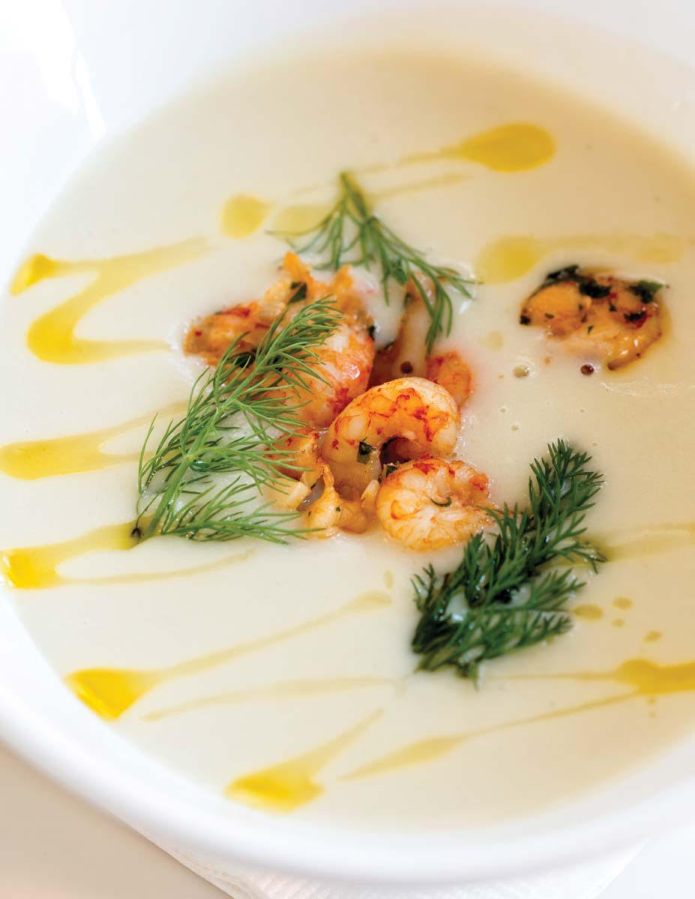 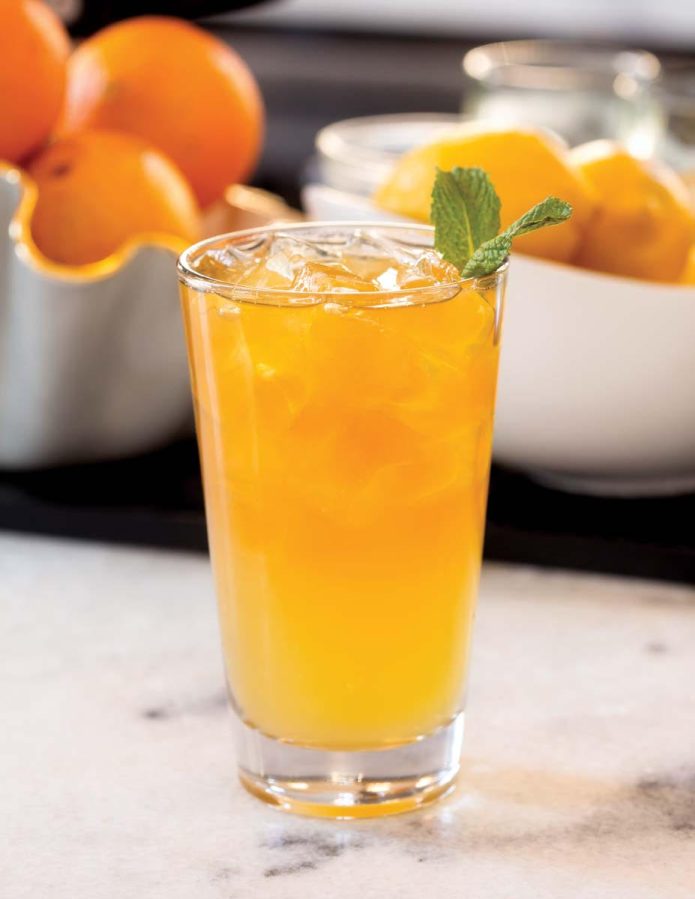 We start brunch with cocktails of Spirit of Resistance and  Stranger Times. Our favorite is the difficult-to-resist Spirit of Resistance. This lovely cocktail is a mix of tequila, Campari, lime, pineapple, Hellfire Shrub and is served in a lowball glass. It is also pretty to look at—hot pink with a frothy light pink top, with the glass half salted with a green, serrano infused salt. Delicious. Biscuits are always difficult to resist for brunch. So we ordered the Buttermilk Biscuits and Sawmill Gravy from the appetizer menu. Two large scrumptious biscuits arrive piping hot, smothered in a creamy, porky gravy, like your Grandma made, but with a garnish of fresh microgreens.
The best dish of the day proves to be the Spring Onion Potato Soup. It is perfect in size, not too large to be filling and not too small to leave us wanting a lot more. It is a beautiful, creamy soup dotted with dill, swimming with crawfish, and drizzled in a lovely Lemon Argumato.  For entrees we select The Neeley Patty Melt and New Orleans Gulf BBQ Shrimp. The savory sandwich arrives on a gorgeous country bread filled with a ground beef patty, caramelized onions, mushrooms, Gruyere cheese served with garlic fries. The shrimp and grits entree is served “heads on” and “tails on,” and with 14 shrimp, it is far larger than expected given I had ordered the small-size option. But no worries. I boxed more than half of it, and will see how it takes out. This shrimp dish is like the old New Orleans recipe in which the shrimp takes on spicy and smoky flavors being cooked in Worcestershire sauce and black pepper. The Gulf shrimp are succulent, cooked to a perfect doneness, and stand up well to the Worcestershire, which it is served swimming in. Yet I find the flavor of the McEwen and Son Grits getting drowned by the Worcestershire concoction. I would prefer them to the side. We order Milk and Cookies dessert. It is one of the most creative desserts I have ever had, while still maintaining its delicious simplicity. An oatmeal raisin “cookie” is formed into a small glass shaped cylinder and is filled with banana milk. Alongside the milk and cookie are three slices of bananas in bananas foster sauce.

These are hands down the best fish tacos I have ever eaten I hope you enjoy!
What’s Fresh: Blackened Mahi Mahi Fish Tacos with Kohlrabi Slaw
Loading Comments...
%d bloggers like this: